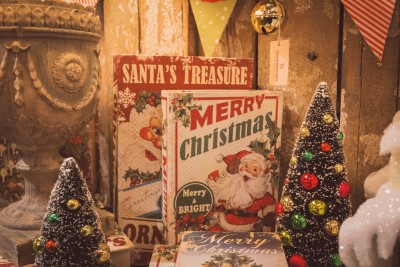 Christmas has always been a festive time in Morgan Crossroads, Alabama and this year has been no different. Ollie Smith brought out his tractor with the scoop on the front. Grumpie and Henry Brown hauled the angels and wreaths down from the attic above the volunteer fire hall. Michael Clomper stood in the scoop on Ollie’s tractor while it was raised high enough for him to mount the decorations on the electric poles along Main Street. They weren’t lit, but in the daylight they were still as festive and attractive as ever.

The ladies exchanged gifts at their December Rosebud Circle meeting at Lucy’s Cafe. Henry Brown passed out candy canes to everyone who walked through the screen door at Brown’s General Store. He even set aside his normal stinginess and didn’t keep tally of who had already received theirs on an earlier visit. By the wood stove in the back of the store he had kept a pot of warm cinnamon apple cider – his wife, Polly’s idea.

This was the first Christmas that Marcella and Edgar had had as a married couple and their first Christmas together in more than fifty years. Edgar kept the fireplace going and Marcella made sure the hot cocoa and marshmallows were available. They hadn’t opened their gifts yet because Edgar’s son, daughter, and grandchildren were due to arrive from Texas late Christmas evening. Of course, the tree was surrounded by boxes and odd-shaped packages piled high. On the counter in the kitchen there was a smorgasbord of desserts that Marcella had asked Eva Jo Clomper to prepare.

There was no snow on Christmas day in Morgan Crossroads this year as is true most years. But as had been the tradition for as long as anyone could remember, the community’s residents had remained inside, huddled together reminiscing and looking forward to another good year. Each of them – Marcella and Edgar, Henry and Polly, Eva Jo, Dora Mae and the rest all send you their best wishes for a blessed holiday season and a wonderful new year.